Was a beautiful morning to be outside.  One of the last before we hit triple digits and it becomes too hot to be out much after dawn.  Played with a Nikon D7200 and Nikon Auto 55mm f1.2 lens.  It is an oldie but very good.

Morning started around 6 AM today.  The sun will only sleep so long and I had to go rouse the morning out of it’s slumber.  Not really but it makes me feel better about getting up so early.

The sunrise was beautiful, in the middle of the sun rise I noticed the moon was still overhead and took a hand held shot of it at 600mm with the Tamron 150-600 at 1/800th of a second.  Handheld it was a bit of camera shake but at this resolution it doesn’t show.

Red Beard, Ruby and a friend was zipping across the sky like great fighter jets battling for the freedom of mankind.  I think I was only able to catch Ruby at the feeder.  He landed on the Oleander and posed but is was so dark I had to go to monochrome.

The Doves rushed to get the rice I put out for them, but then left after they realized I was snapping pictures.  As soon as I was inside I went to the window that looks out over where I put the food and they were fighting over who gets to be king, while the peasants didn’t care and were scarfing it down hoping to finish before a king was announced.

Sat down with some coffee and spent another hour at bible study.  Now I am off to fry some bacon, make a quiche and start a pot of vegetable beef soup. 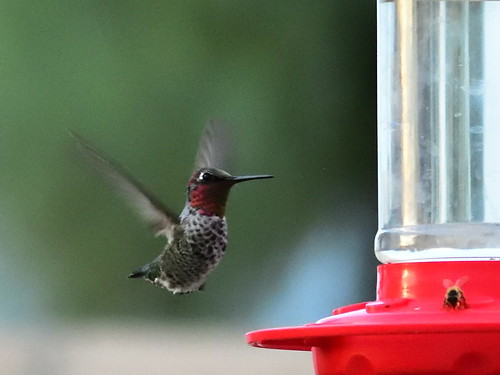 A few pictures from Hangzhou back in April of this year. The white doves were so peaceful even a rat came out of it’s hole. I bet it stayed hid during G20 afraid. The place was so busy with building. I would have love to have made it there for G20 to see how everything turned out.

It’s cloudy here today, and I have had to let the hummingbird feeder go dry because of the bees. So poor Red Beard and Ruby zipped up to ask me to make them some more, so I will get them some out this afternoon. I wish there was a way to give the bees something they prefer instead of hummingbird food. I doubt the bee keepers want their hives full of sugar water. The hummingbirds keep my yard nearly mosquito free as long as mom doesn’t stop by. When she is here those mosquitoes are like rockets. In fact I bet they all followed her out to OK. Back to Bible Study then on to hummingbird food.

The Lord rose me out of bed before the sun rise took some flash pics of the doves. Caught Tom hanging out in the Mesquite Tree. He took off afraid I was going to flashy thing him too. The moon was still hanging in the sky so while waiting for the sunrise snapped a shot of it. The sunrise was glorious. Snapped the last shot of my 35mm Film with it and then took the camera inside and gave it a through cleaning.

I made the meme to bring some attention that the world is precariously close to war and we all need to pray that our leaders and future leaders do all they can to prevent it. After making it I see it also is a call for Christians.
Philippians 4:4-7 “Rejoice in the Lord always: and again I say, Rejoice. Let your moderation be known unto all men. The Lord is at hand. Be careful for nothing; but in every thing by prayer and supplication with thanksgiving let your requests be made known unto God. And the peace of God, which passeth all understanding, shall keep your hearts and minds through Christ Jesus.”